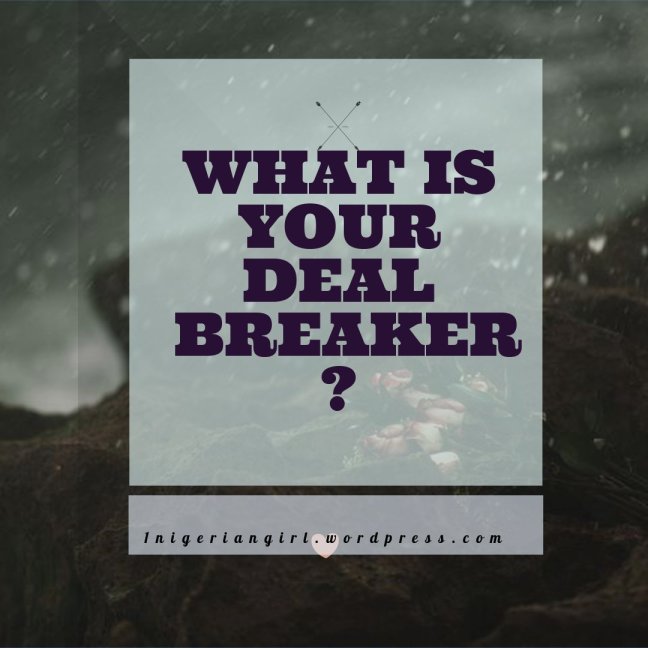 According to a quick Google search i ran, minutes of writing this post, a deal breaker is basically a turn off, something you can’t stand in a significant other. You know, that thing that makes you say, hell no, you’re canceled.

I have a list, something I like to call a cut off mark and when I meet someone new, I begin to check it off. So there’s a compulsory box, if you check that and at least, three others,  you’re qualified. If you check the compulsory box and one other, I can manage, make e just be like… Before world people will say I’m too picky 😂

It sounds like a joke even,and I won’t include it here for obvious reasons – these days, you never know what will end up on instablog, and Nigerians as vicious as they come, keep receipts. We don’t need that now, do we?

On the flip, if you don’t have a list, you should get one, for two reasons; first, too many nightmares these days come dressed like daydreams. Secondly, you don’t want to settle…

I daresay, that I expect the list to whittle down with time, some things get added and others eliminated. For instance, when I was a teenager, I didn’t have a list, once you were fine, you were good to go. These days, I see myself choosing intellect over physical beauty and the kind of boys I’ve even been attracted to these days sef, I wouldn’t have touched them with a foot-long pole when I was, like 16. But then, It is what it is.

Anyone ever have those days when you just feel “singular” to stupor and begin to miss the concept of someone asking you if you’ve eaten today or what you want to be when you grow up? So, one of those days, my friend fixed me up with her cousin – please, if you have sense, don’t try this at home.

So, everything started off well, that I began to wonder why I never tried link ups sooner. He checked all the major boxes, he was tall – a giant. I’m a very small person and I’m a tad attracted to taller people because really, I don’t want to give birth to toys or put my children through all the bullying and picking-on i suffered. I don’t want them to blame me for making them short by marrying someone as short as me. He also checked the smart box, because really, I don’t want to have to name my child “dullapo” for obvious reasons, although I’m beginning to notice book-smart boys, are on a different level – of weird.

The only downside I noticed was that he uses glasses -I have myopia, myself, so how do we even begin to see ourselves in the relationship, if?

You know how they say, if it looks too good to be true, then it probably is. Ladies and gentlemen of the internet, dude and I started talking and everything was going on fine till one night, he sent me a message and I didn’t see it because I was offline, preparing for an exam I had the next day. So, I Came back online around 4am and replied him. He asked me why I was online at such an odd time and I reminded him that he was online too. In his words, and I kid you not, “It’s different, I’m a guy. You’re a girl, you’re not meant to be online by this time, it makes you look bad..”

Of all the emotions I could feel, I felt sad. You know that feeling when you’re like … “I was just beginning to like you.. “. It’s like how you recoil when you touch a snake. Omo, i drew back and started to mind my business. He noticed and asked why. I said it was nothing, because really, how do you begin to explain to someone that they’re a misogynist chauvinistic piece of – insert something unprintable here. As a personal principle, I often let people hold on to their opinions while I stand by what I believe in.

I tried to hint that there was something off with his statement and he told me not to start that gender equality nonsense.  wo! Sorry o, uncle Hitler.  I didn’t mean to offend you, Let me carry my Kaya and be going. So, I left him alone – again, and from time to time I would say to myself, see as fine boy waste like that because of no sense.

Anyway, a few days of not talking, he says something is definitely wrong and demands to know what he did wrong. I told him, and he said he was sorry, that it came out the wrong way yada yada. Well, if I had sardines for a brain, I would have believed that, but I’ve been around long enough to know that people always mean the things they say flippantly, and without thinking. I let it go but I knew in my mind there was no future with someone who thinks it’s okay for boys to be online at 4am and not girls. In my thinking, it wouldn’t be long before he says domestic chores are for women alone…

Hold your breath, my people. He didn’t even waste time to disappoint me. Talk about when  village people are steady beating konga drum on your head. A few days later, we were talking about the holidays and all, and I said the only thing I dreaded about going home was house chores. He said I shouldn’t be complaining, that it should not be a big deal, considering I was going to be a wife one day and should be used to it by now. At this point, I just packed my bags and left. Like, people still think like this in 2018? Okay o

Call me Daughter of Chimamanda or some other derogatory term used to describe women that are “woke” but sexism, mysoginism or whatever umbrella they come under these days, is a huge deal breaker for me. I just can’t stand a person who thinks that way, be they male or female. Like, no one is that handsome for me to put up with it. I said what I said!

I ran a poll on my social media wherein people had to tell me what their deal breakers were. I thought I was weird until I saw entries, someone even said makeup was a turn off, another said chewing noisily. Most of the entries ranged from cleanliness, insensitivity, to selfishness. Some said they didn’t want a controlling, domineering man. A large number said they didn’t want an ugly, short or skinny guy. I’ve talked to a few guys on the other hand who also said they wanted lightskinned, average height girls with lots of “assets”.

An entry I especially found funny but true and I’m going quote here is from a guy, who said :

Another entry from a female this time, was :

” Someone that can’t hold a reasonable interesting conversation….. I mean, if we’re going to be in a relationship we’ll be doing a lot of talking na…”

At this point, and for lack of what else to say, i’m just going to throw it out here to you guys. What is your deal breaker?  Let me know in the comment section.